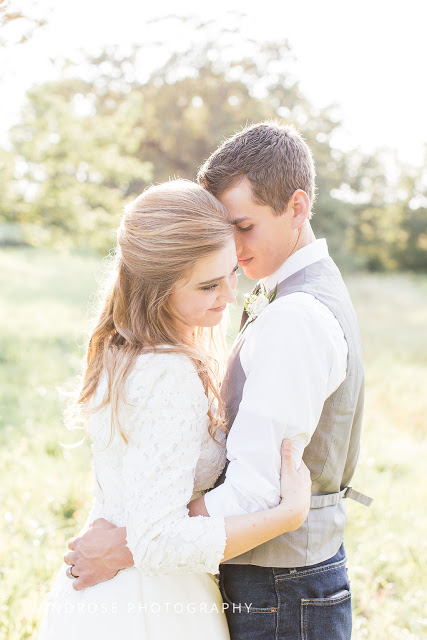 Hello friends! Today Carson + Carolina are here to share their love story with you! It has been awhile in the writing but here it finally is! I love how unique their story is and how God worked in their lives to take them from being totally indifferent about each other, to falling head over heels in love!
The following pictures were all taken in random order throughout their relationship.
Enjoy their story! 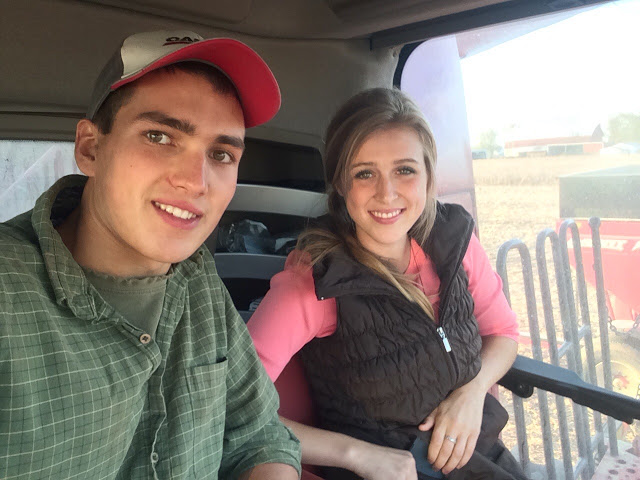 (their first combine date, the day after they started their relationship)

Carson: “I met the Bowers family in 2011 when our family invited ourselves to their home for a visit.
I really didn’t think about Carolina at all at that time, and I was only 16 years old…so probably a bit on the young side then anyways.”
Carolina: “In 2011 the Bontrager family came in their bus to visit us in Idaho, while they were on tour. Their dad had called mine and basically invited themselves over! We were all complete strangers! I don’t remember Carson, but my first impression of their boys wasn’t an excellent one. They seemed shy and hard to talk to. The girls, though were sweet and we talked about lots of things!” 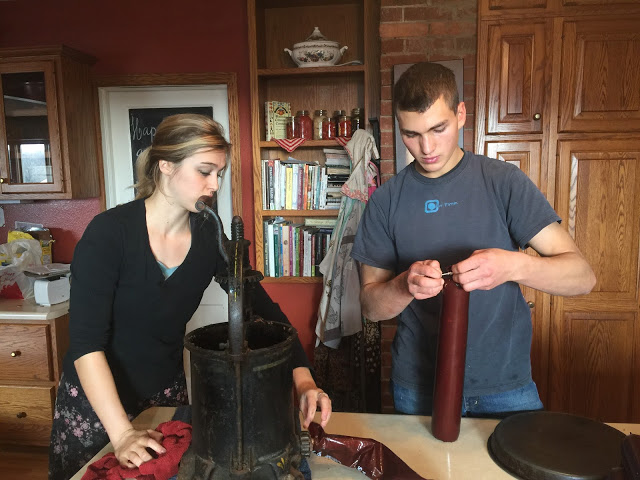 Carson: “Well, the years came and went.  The Bowers family came to our farm twice to sing and speak for our Labor Day Turning Hearts Celebration, and we saw them a number of times in our travels or when they were traveling through and stopped by. We were also one of the drop points for boxes of dvds that they needed. We all got along great, but I still didn’t have any thoughts for Carolina.”
Carolina: “My family began traveling in a bus, and visited the Bontragers off and on for Turning Hearts Celebrations or whenever we “conveniently” came through Iowa!
Honestly, I never thought much about going to their house and didn’t care much about the visits. My parents mentioned something about Carson to me on several occasions, and each time I readily refused this thought, even though I did pray about him a few times. I just thought that we didn’t have things in common and didn’t have anything to talk about.” 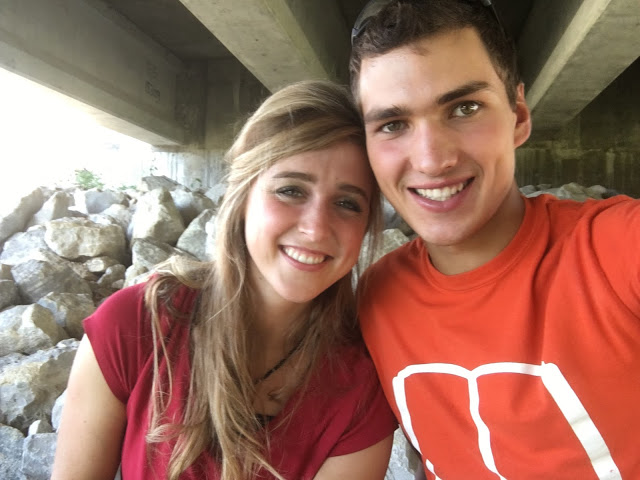 (country date down under the bridge, beside the creek)

Carson: “So basically, for a little background on my thoughts during my teenage years: I always figured I’d get married when I was about 20. ( I know, I missed it 🙂 I don’t really know why, other than I don’t think I prayed about what age God thought would be best. As I got a bit older, about sixteen, I began actively praying and seeking the Lord for his will for a wife.  I had been praying for a Godly wife since I was about 5 years old, but somehow I just felt the need a little more in my teenage years. =) I was trying to prepare as best as I could for marriage, but I think I often put too high a priority on trying to figure out who I should marry. (It is very important for young men to be getting to know young ladies in a wholesome manner, but our relationship with the Lord should always be top priority!) Anyway, as a couple years went by, I began to pray and fast a bit more seriously for a spouse.  I really wanted the Lord’s will and didn’t want to pursue a young lady without His leading.”
Carolina: “Fast forward to 2016: my family traveled all year and ended up at the Bontrager’s house at least 5 times!“ 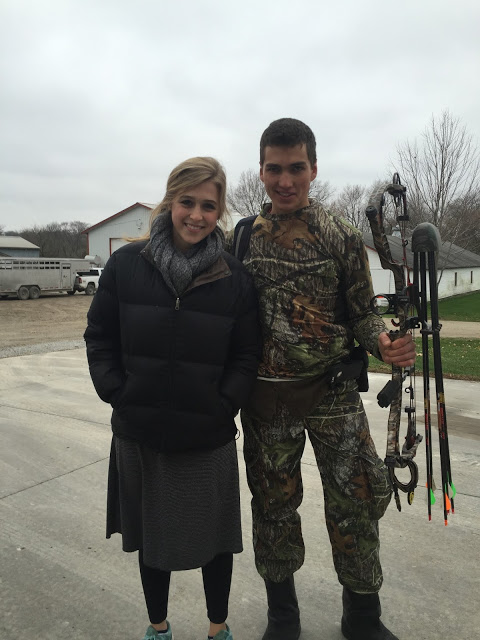 Carson: “About the end of August to beginning of September 2016 I heard a lesson in church that very much convicted me.  Our class teacher brought out the parallel between two young people going on a special date, and what our relationship with the Lord should be like. I knew right then that if I were to get married and not have any better relationship with my wife than I currently had with the Lord, that it wouldn’t be a good thing. I decided to take a break from praying so hard for a wife, and to just seek the Lord to draw closer to Him. It wasn’t more than a week later than we our annual Turning Hearts celebration at our farm.  For some reason, that Monday the thought popped into my head that it would be fun to have a young lady with me in the tractor as I pulled two of the wagons.  And I thought that Carolina would be great!  I honestly tried to brush it aside, as I was trying to take a break from thinking and praying about a wife.The next morning we had breakfast at our farm with all the families who were still around, including the Bowers. I just went about everything like normal. I don’t even think I hardly talked to Carolina. After breakfast, Mrs. Bowers pulled me aside and said she thought it would really be good for me to spend some time getting to know Carolina.  I was just a bit surprised, as I had never had anything like this happen to me before, but I did tell her I would at least try to get to know her a bit better. “
Carolina: “In August/September 2017, I felt I should be praying and fasting about if Carson was possibly God’s will for me, though I still didn’t have any feelings for the idea.” 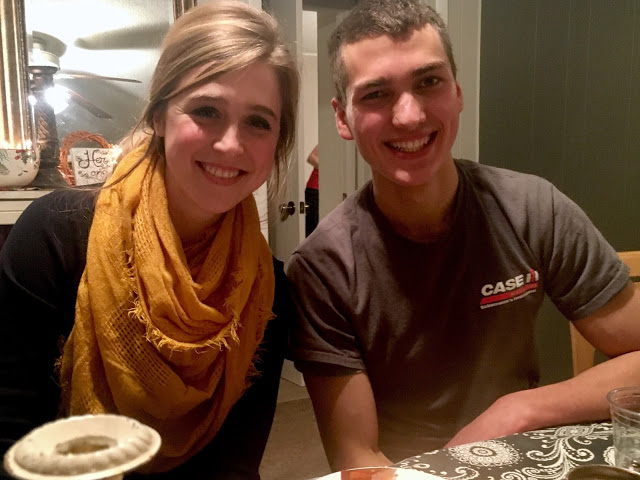 (one of maaaaany fun evenings Carson spent at the Bowers’, whilst our family was on winter tour)

Carson: “One week later our family was at Village Creek Bible Camp, where we help lead a family camp every September.  The Bowers family was there attending, so I thought I would at least try to spend a bit of time getting to know Carolina better.  I also didn’t feel like I would be overstepping my bounds at all either since I already had her mother’s blessing! =) The week went great, and I really enjoyed getting to know her and found her to be a more amazing girl than I had thought! (She was amazing all along obviously, somehow I just had it in my head that we wouldn’t mesh) The Bowers family stopped by our house for a bit that weekend after camp. Everyone was very excited at that point because Joshua and Cassidy had just begun their relationship while at family camp, actually. Farm work was very busy for me though, so I really didn’t have any time to talk to Carolina again during that visit. I did, however, start to seriously pray about Carolina that week of family camp, and spent some extra time in prayer and fasting the few weeks following.”
Carolina: “We got to spend quite a bit of time talking while at a family camp, and a few other times, and I found out he was not too bad! He was actually likable! So I prayed and fasted a whole lot more.” 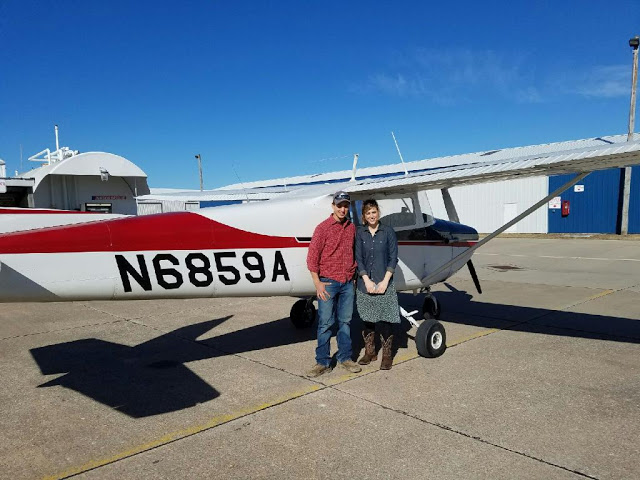 Carson: “The Bowers family moved to Iowa about the middle of October. They bought a farm house about 30 minutes from our house. A few days after they had moved, I set up an appointment early one morning to meet with Mr. Bowers. (I hardly slept a wink the night before!) I needed to get his permission to pursue his firstborn daughter!
I had a great meeting with him. He gave me his approval, and that he would talk to Carolina.”
Carolina: “In the middle of October my family bought a home in Iowa! I still had no idea if Carson had ever thought about me, but I prayed that if it was His will, God would put me on Carson’s heart, mind and prayers.” 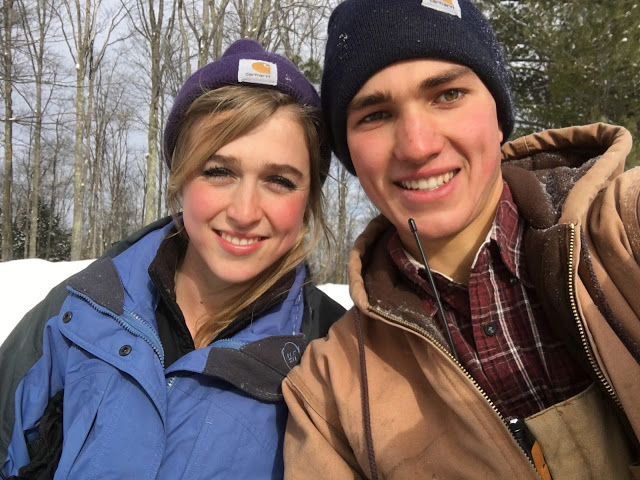 Carson: “That same evening (the day I talked with Carolina’s dad) I was over at their new house to help with some landscaping.  I wasn’t even going to say anything, but my brother Joshua said he figured that Mr. Bowers had already talked to Carolina and that I should ask her what she thought.  So a bit after we got there, I just asked her if her dad had talked to her, and what she thought of everything. She said he had, and that she would be willing to begin a relationship with me! (relieved sigh!)”
Carolina: “We had only lived in Iowa for three days when Carson asked my dad if he could get to know me. I was not surprised because I had been praying, and yet I was very surprised, because he hadn’t seemed interested hardly at all.” 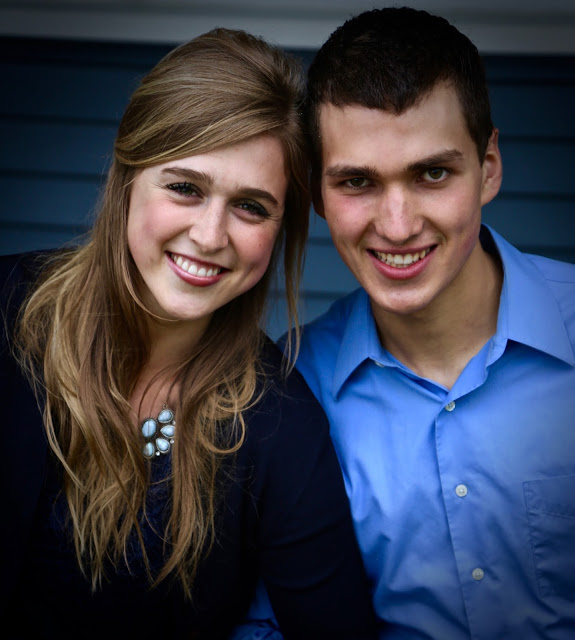 (picture taken by Cassidy, the night after we got engaged)
Carson: “Over the next few months we spent a lot of special time together harvesting in the tractor, walking the woods, hunting, being at their or our house around the table, and other ways as well.  We both continued to enjoy being together, and we officially went on our first dinner date in December.  Throughout the winter while my family was on tour I especially spent a lot of time at the Bower’s home with their whole family, and going on more walks and dates with Carolina. Mr. Bowers also took the time to go out for breakfast with me every couple weeks. Those times were very special as he got to know me better, and I learned what an amazing dad Carolina really had! The relationship wasn’t always perfectly smooth, but the Lord did bless us and we did have a wonderful time getting to know each other.  (On a side note, it is also a blessing to have such amazing in-laws!)
Carolina: “So we began a very great relationship full of activities and quality time! Carson is adventurous and hands on, therefore, we did many things like hunting, flying riding airplanes, hiking, shooting guns, and also lots of great walks and talks, time with our family, dates in tractors and trucks as well as at Scheels and restaurants. He bought me a bow and arrows and taught me how to use it for hunting season! We were blessed to spend lots of time together very frequently!” 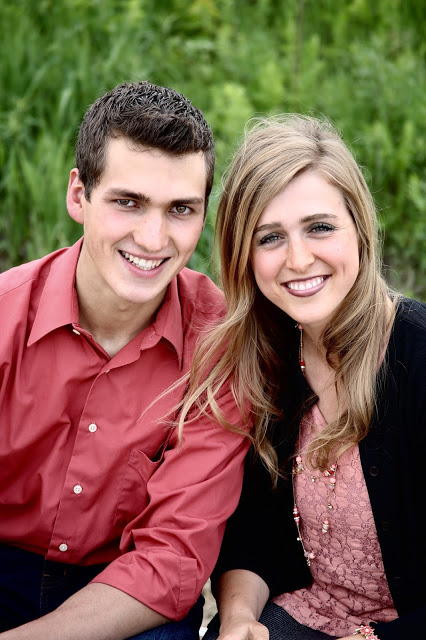 (one of the pictures from our engagement photos)

Carson: “On April 18th, 2017, I proposed to Carolina while we were sitting in a treestand. And……. She said yes!
Carolina: “We got engaged in a tree stand in April and the next few months until the wedding were full of house preparations/ building, lots of planning and projects and spending special last moments with our families.” 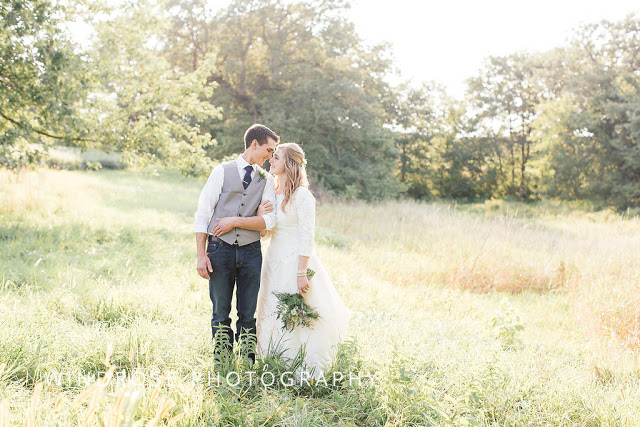 Carson: “We got married on September 1st, and I am so blessed to have such an amazing wife! She is such a wonderful helpmeet and I am grateful to the Lord for her!”
Carolina: “We got married September 1st along with Joshua and Cassidy, in a big double wedding! It was a day to remember forever! Carson is truly an amazing man! I can’t imagine life without him. He is an amazing leader, is so hospitable, is a witness wherever he goes, has a joyful, happy heart, loves children, and wants to do God’s will for his life! He is gracious, sweet, tender, helpful, hardworking and loves good deals and quality! He is gifted in finances, budgeting and business endeavors! I’m very thankful for how God worked to bring us together and I’m looking forward to seeing what He has in store for the rest of our lives.” 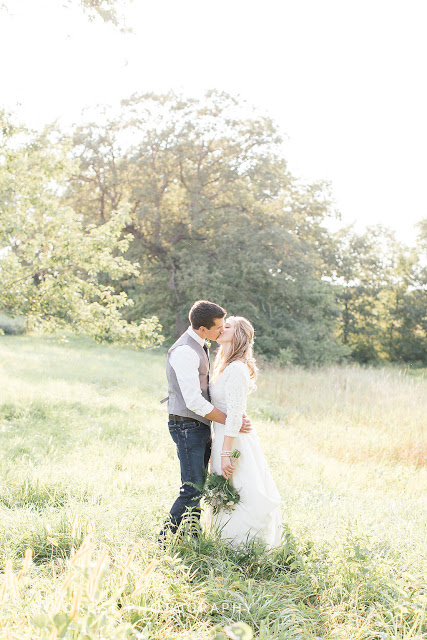 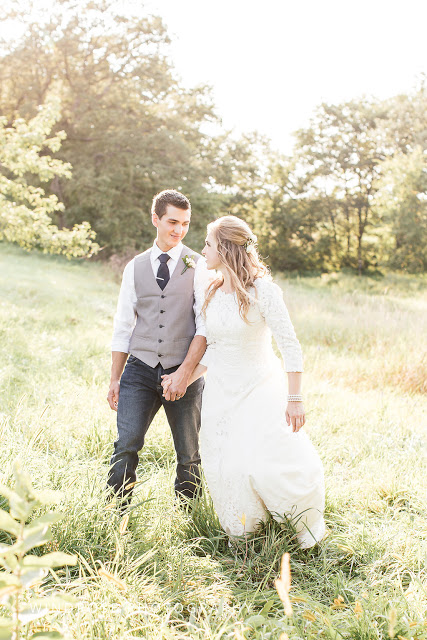 “He hath made everything beautiful in His time….”
Ecclesiastes 3:11
Previous
Next