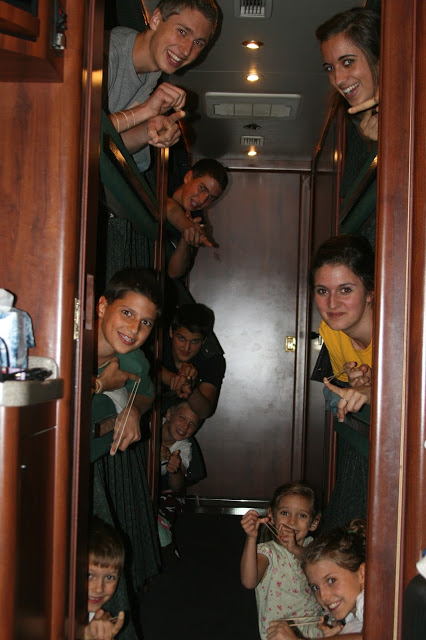 this may sound to some like a recipe for disaster.
for those other sibling groups out there who are crazy enough to prefer rubber band wars
over almost any other form of entertainment…
you understand.
{smile}
Scenario:
Taking you back to July 6th….
We are in the large and very populous town of Whitehorse.
{large by the standards of town sizes up here)
It’s the parent’s 24th anniversary in two days so they are going out for a date on the town to celebrate.
that leaves the ten home along.
ahem, “in the bus” alone.
after brother dear maneuvers all over the place to please sister who is unsuccessfully TRYING to find a free and unlocked wifi hot spot
{basically non-existent but hey, doesn’t hurt to try!}
we finally give up and park the bus along the side of a random street.
Whilst consuming our delicious dinner that sister#2 & bro#2 had prepared,
we all discuss what to do with the remainder of our evening.
We like to do things that are wild and unusual when the parents are gone.
But we are rather low on options tonight, being contained in this 45 ft long prison entertainer coach.
{FYI. whoever came up with the idea to call this an entertainer coach…well, they obviously didn’t have 10 kids. or they would’ve much more appropriately called it something quite different. just sayin}
Various options are named.
Voting begins, sides are taken, and everyone wants a say.
Before fifty seconds have passed this bus is beginning to represent a Civil War battlefield.
In our house whoever talks the loudest gets heard.
So nearly everyone is attempting to talk the loudest.
Peacemaker bro #1
(what WOULD we do without him)
brings silence and order to the chaos.
Some brilliant soul suggests a rubber band war.
For the first time all evening, everyone is in agreement!
Imagine that.
So preparations begin.
Brothers #3, #4, #5, & #6 bring out their “hoarded” rubber band supplies and divvy them out.
Bro #1 gives instructions and sets the rules and boundaries.
Various siblings change to appropriate clothing
(as much of the body needs to be covered as possible because bare skin is the biggest target)
Everyone is “mounted” in their various bunks and ready to start.
Sister #1 remembers that the second and third generations will want to see pictures of this someday.
So she leaps gracefully descends from her top bunk and flies to the back room where
she attempts to balance the camera on the back of the couch, get everyone in focus, hit the button, and return to her top bunk in the 10 seconds before the timer is up and picture is taken.
After several unsuccessful attempts of one or all of the above mentioned, a successful shot with EVERYONE IN IT
is finally taken.
(see top of this post)
Now the lights are dimmed.
Well, actually, eliminated altogether.
Everyone draws their curtains shut and await the signal to be given by Bro #1.
“Ready, Set……GO”
May I leave you to imagine the rest?!
The frustrating part is that these ten are so competitive that they can’t stand to let anyone know that they’ve been hit.
So finally, part way through, a rule is made that if you get hit, you must say “ouch”.
or something to let your opponent know that they have good aim.
From then on it is even more fun as now you can know if you hit someone.
“Ouch’s” are heard quite frequently.
{SCORE}
The brothers think themselves so tough, that when they are hit they say
“ouch…but that didn’t hurt”.
whatever.
the sisters are tough too but they don’t feel the need to make sure everyone else thinks they didn’t get hurt.
{hehe}
::::::::::::::::::::::
To summarize the story…well, everyone lived!
Although the next day there are various small tender spots on various people from particularly well-aimed rubber bands. =)
But it was worth it!
And such fun!
Just goes to show…
it doesn’t take fancy/expensive toys/games/movies to have a fun sibling party!
posted by chelsy
Previous
Next